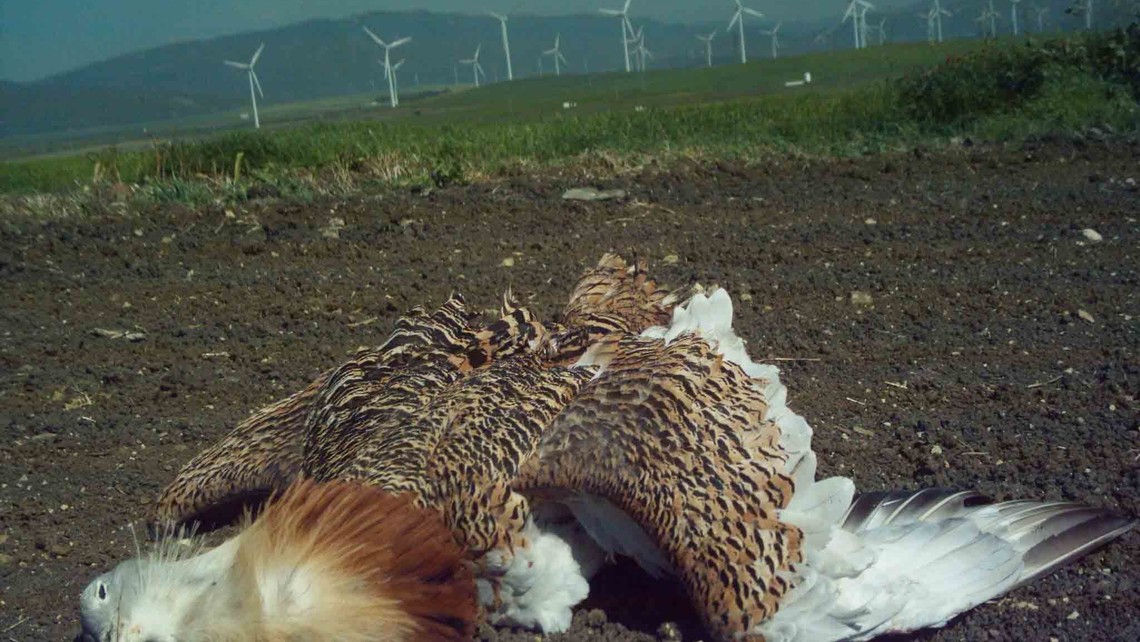 DON’T LET THIS BE OUR HEADLINE AND LEGACY TOO •England’s last golden eagle dead April 2016 • “We can only hope that the small and vulnerable golden eagle population in south-west Scotland increases and expands in the future, and that some eagles disperse into England.” Dawn Balmer, head of surveys for the British Trust for Ornithology

Survival Rates • it is estimated that only 10% of wild-born eagles survive past five years. http://curiodyssey.org/animals/our-animals/birds/golden-eagle/ • In the western Rocky Mountains, 50% of golden eagles banded in the nest died by the time they were 2 and a half years and an estimated 75% died by the time they were 5 years old McGahan, J. (1968). “Ecology of the Golden Eagle”. Auk 85 (1): 1–12 • Think what it is when you add the wind turbine deaths?

Nesting density 1997 vs 2005 • The nesting density for a breeding population near Livermore, California, and the Altamont Pass Wind Farm is among the highest in the world for golden eagles, with at least 44 pairs in 1997, a density of one pair per 19 km (12 mi). Hunt, W. Grainger; Jackman, Ron E.; Hunt, Teresa L.; Driscoll, Daniel E.; Culp, Lois (June 1999). “A Population Study of Golden Eagles in the Altamont Pass Wind Resource Area: Population Trend Analysis 1994–1997” • From 23 January to 25 May 2005, the authors surveyed 58 of 61 golden eagle territories that were occupied by pairs in 2000 within 30 km of the WRA boundary • Hunt, W. Grainger; Hunt, Teresa L The trend of golden eagle territory occupancy in the vicinity of the altamont pass wind resource area: 2005 survey

The Trend Of Golden Eagle Territory Occupancy In The Vicinity Of The Altamont Pass Wind Resource Area: 2005 Survey • The area surrounding the Altamont Pass Wind Resource Area (WRA) contains a higher reported density of nesting golden eagles than anywhere else in the world. • The Predatory Bird Research Group (PBRG) has been studying aspects of golden eagle ecology in the region since 1994 to determine if wind turbine blade strikes in the WRA are causing the population to decline. • Estimates of the number of eagles annually killed by turbines in the WRA range from 40 to more than 100. • Because golden eagles mature and reproduce slowly, and their populations are particularly sensitive to changes in adult and sub-adult survival rates, state and federal wildlife agencies have been concerned for the welfare of the population.

The Trend Of Golden Eagle Territory Occupancy In The Vicinity Of The Altamont Pass Wind Resource Area: 2005 Survey (cont.) • This project was a follow-on to the work presented in the 2002 report. • spring of 2005, the research team surveyed 58 golden eagle breeding territories within 30 km (19 miles) of the WRA boundary, each of which was occupied by a pair of eagles in 2000. • designed to test the hypothesis that sufficient numbers of floaters exist within the area to fill all breeding vacancies as they occur.

The Trend Of Golden Eagle Territory Occupancy In The Vicinity Of The Altamont Pass Wind Resource Area: 2005 Survey (cont.) • all 58 that were occupied by pairs in 2000 were occupied by pairs in 2005, • indicates that the breeding population of golden eagles within the vicinity of Altamont Pass remains intact. • however, the Altamont WRA kills more eagles than can be produced by the studied sample of 58 pairs • that sample necessarily being part of a larger population that has provided an influx of recruits to fill nesting territory vacancies. • Researchers estimate that 167 breeding pairs are required to sustain 50 blade-strike fatalities per year. • www.energy.ca.gov/2006publications/…/CEC-500-2006-056.PDF

6 year study on radio‐tagged golden eagles in the Diablo Range • suggests that the APWRA has a negative impact on the local eagle population, i.e., eagles nesting within 30 km of the APWRA. • Of 267 radio‐tagged eagles, 100 fatalities were recovered • Of these, 42 birds were killed by blade strikes • estimate that about 50 golden eagles are killed per year in the APWRA • Combined with age‐specific mortality data suggests that in order to compensate for 50 turbine‐related eagle deaths per year, the reproductive output of 167 pairs is required • However, because the local population consists of only 58 active territories, immigration into this population is required to maintain its current level Hunt and Hunt 2006

RANGE MANAGEMENT PRACTICES TO REDUCE WIND TURBINE IMPACTS ON BURROWING OWLS AND OTHER RAPTORS IN THE ALTAMONT PASS WIND RESOURCE AREA, CALIFORNIA, October 2009 • Evidence from the one repowered wind farm in the APWRA (Diablo Winds) suggests that at best a 13% reduction in the golden eagle mortality was achieved. • The number of raptors observed per hour was similar to past studies in the • APWRA. Differences in detections over the last decade included an apparent 56 percent decrease in golden eagles • Even at this lower level of mortality, continued immigration would be required to sustain the local golden eagle population. • Thus, the APWRA will likely continue to serve as a population “sink” for golden eagles for the foreseeable future California Energy Commission CEC-500-2008-080

Without you’re help, the eagle population will continue to decline

Recent studies have reported large numbers of bats being killed at wind farms in many parts of North... END_OF_DOCUMENT_TOKEN_TO_BE_REPLACED