Money from Dead Eagles: Audubon Society on the Take 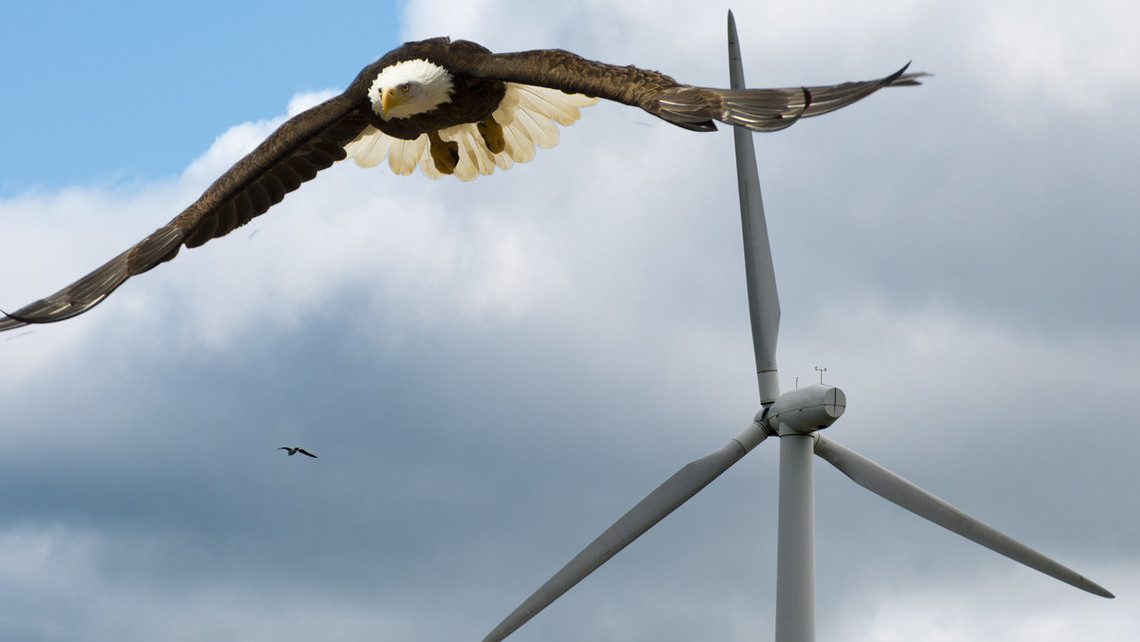 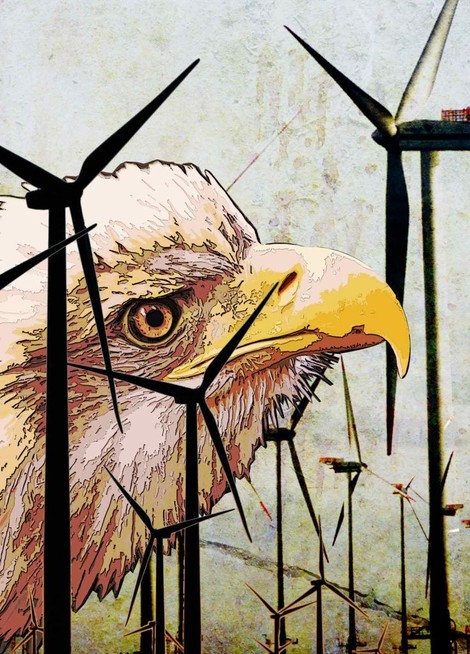 “Paying the Audubon Society $10,500 per MW for repowered turbines and up to $5 million for this environmental disaster also does not reduce eagle mortality. It simply persuades Audubon to keep silent about the slaughter. The truth is in the higher carcass counts and mortality numbers at Altamont.”

Altamont, the U.S. wind industry’s most controversial area, has been in the news a great deal lately. Amid the controversy, developers are seeking public support for the huge new turbines to be installed there.

One of the major selling points for these turbines is that they will reduce eagle mortality. However, carefully hidden facts say otherwise. Although Altamont, the media, and Audubon Society are reporting a substantial decline in eagle mortality, the fact is that eagle carcass counts and other body counts have increased significantly at this “green” industrial slaughterhouse.

The highest eagle mortality estimates to ever come out of Altamont were presented in a 1998–2003 study. In this study, only 56 eagle carcasses were collected over a five-year period.  This study then went on to report Golden Eagle mortality adjusted for scavenger removal and search detection – and concluded that it was 116.5 dead birds per year. This estimate was based on less than one-third the number of eagle carcasses that are now being collected each year.

The Smallwood studies (published in 2004) determined that the small old turbines at Altamont were killing thousands of eagles, hawks, owls and other birds each year. These studies produced 1,189 bird carcasses and 10 percent of these carcasses were determined not to be wind farm related. In other words only about 120 of the carcasses found by researchers were dismissed from the turbine mortality data.

In the later 2005–2110 study used by Audubon on to assess the required reductions in raptor mortality for the Audubon settlement, 6,133 carcasses were found (over 5 times more) during similar searches and more than 1,500 (over 10 times more) carcasses were dismissed from the data (see table 2-2).  This total also includes 21 additional eagle carcasses that were picked up the WRRS and dismissed from calculations. These studies reported a total of 126 golden eagle carcasses or about 21 per year.

Despite rigged research and carcasses not being reported, the eagle body count at Altamont has increased by 2–3 times when compared to the previous 1998–2003 study. These increased numbers can be seen in table 3-1.

Recently, the U.S. Fish and Wildlife Service’s Office of Law Enforcement for California and Nevada stated in an article that the small turbines “owned and operated” by AWI in the Altamont had been associated with the death or injury of 67 golden eagles between 2004 and 2014.

In March 2015 another article about eagle deaths and repowering turbines at Altamont was published: “Despite bird deaths, electric wind farm wins extension.”

The article told us all about these deadly these older turbines that needed to be replaced because they have killed 31 eagles over the last five years (approx. 6 per year). But these articles, like all mainstream media wind energy articles, conveniently left out important facts.

A few weeks ago, the USFWS gave me a total monthly breakdown of eagle carcasses that they had received from Altamont.  They reported receiving 33 and 37 eagle carcasses from Altamont in 2013 and 2014 respectively.  This number did not include injured eagles. What this means is that the rest of Altamont has been killing far more eagles with far fewer operational megawatts (MWs) of electricity. During the ongoing construction, large sections of Altamont have been shut down.

If the AWI had been killing or injuring an average of 6 to 6.7 eagles per year, then the remainder of Altamont during this period has probably been killing and injuring an average of 30–35 eagles per year. When looking at these fatality numbers, keep in mind that these are just actual body counts.  They do not take into consideration dead or wounded eagles that are never found, or wind personnel not reporting high priority turbine kills.

The 1998–2003 Smallwood studies picked up an average of only 11 eagles per year, and adjusted fatality estimates were put at 116 per year. With these new eagle body counts, would new Smallwood studies estimate that 250–300 golden eagles were being killed each year at Altamont?

The increase in carcass counts at Altamont is very understandable for many reasons. When calculated in cubic meters, each of the new massive turbines being installed at Altamont has an eagle-killing rotor sweep over 50 times greater than the turbines being replaced.  These turbines are not being replaced at a ratio of anywhere near 50 to one. The replacement rate is more like 15 or 20 to 1.

Reducing the numbers of small turbines at Altamont does not help eagles when the cubic feet of deadly rotor sweep in their habitat at Altamont is being greatly increased.

A close look at Google earth imagery illustrates this new higher concentration of rotor sweep being installed on the ridgelines. Pay attention to the number of new footings for these huge turbines. In the Google earth image from 2015 (see below), there are 16 turbine footings. In the 2007 image of Altamont about 253 of the small 100 kW turbines can be seen. The ratio on these new behemoth turbines is 15.8 to one.

In addition to these huge new turbines that reach hundreds of feet into raptor airspace, there is the deadly illusion created from massive blades apparently rotating more slowly than old turbine blades – but actually having much faster blade tip speeds. These massive turbines have tip speeds 33 percent faster than the old deadly 100 kW turbines: 180 to 200 miles per hour! These slower rotations fool the eagles, other species and even people more easily.

The new eagle-killing turbines appear to be spinning at much lower speeds, especially when one looks at the thicker blade portions closest to the turbine nacelles.  This means that each hour of each daylight day of each month of each year, they have a greater opportunity to smash an eagle out of the sky.

There is no way to make this style of wind turbine safe, unless they are put in a dumpster. Building these turbines bigger, faster, with far more rotor sweep reaching higher into the air, where eagles soar, does not make them safer. Even suggesting that they can be made safe is very deceptive. While the wind industry claims it is very concerned and is working to reduce the slaughter of protected species like eagles, it is not happening.

If we had house fans without protective cages, after several decades there would be millions of people walking around this country without fingers. But these turbines are not like an uncaged house fan, posing a danger to careless digits. They are a million times more dangerous because of their size and blade tip speeds that far exceed any house fan. These new big turbines do not cut off fingers, they cut eagles in half or send body parts flying in several different directions as their bodies explode upon impact.

Paying the Audubon Society $10,500 per MW for repowered turbines and up to $5 million for this environmental disaster also does not reduce eagle mortality. It simply persuades Audubon to keep silent about the slaughter. The truth is in the higher carcass counts and mortality numbers at Altamont.

Speaking of the new Altamont, no one should ever expect Audubon to ever make any of this right. That is because this money and the meaningless settlement agreement to reduce raptor mortality by 50% is not the entire story. Here is what Audubon signed away, via its agreement with the wind industry, California Attorney General and CARE (Californians for Renewable Energy).

“8. Covenants Not to Sue

The AG, Audubon and CARE hereby release any and all existing and future claims against NextEra Wind (including any new entities formed for repowering or other purposes stated herein) and the NextEra Settlers, with respect to any and all avian and bat mortality at the APWRA for existing and repowered turbines. If, for any reason, this Agreement or any portion thereof is terminated or otherwise deemed invalid, the release of existing and future claims by the AG, Audubon and CARE will continue to apply to any phase of repowering for which Approvals have been obtained.”

What reasonable person or organization, claiming to be working in the best interests of eagles being annihilated by this industry, would ever sign away its future rights and voluntarily make its organization irrelevant?  Audubon did exactly that, which is why nothing this group has to say concerning Altamont should ever be trusted.

It is also why new legal challenges need to be made by unbiased, disinterested outside groups that would expose the wind industry’s rigged and unscientific research. That research has been manipulated to hide the horrendous impacts on eagles and other raptors by a wind industry impacts that will never do anything to help these birds.

A few weeks ago, I had a lengthy meeting with a wind industry employee who is disgusted by the large numbers of eagles being killed. He told me about a culture of not reporting high priority carcasses. As I looked over dozens of images of chopped up eagles, this employee also told me that if too many carcasses are found or reported, the conscientious employee could expect to be laid off or fired.

As I mentioned, the golden eagle body count is way up at Altamont. The public and a grand jury need to ask the industry and its fake experts to explain all of this.

Industry plan to reduce deadly effects of blades may not be enough, some scientists say... END_OF_DOCUMENT_TOKEN_TO_BE_REPLACED

On 12 January 2012, at the First Scientific Congress... END_OF_DOCUMENT_TOKEN_TO_BE_REPLACED