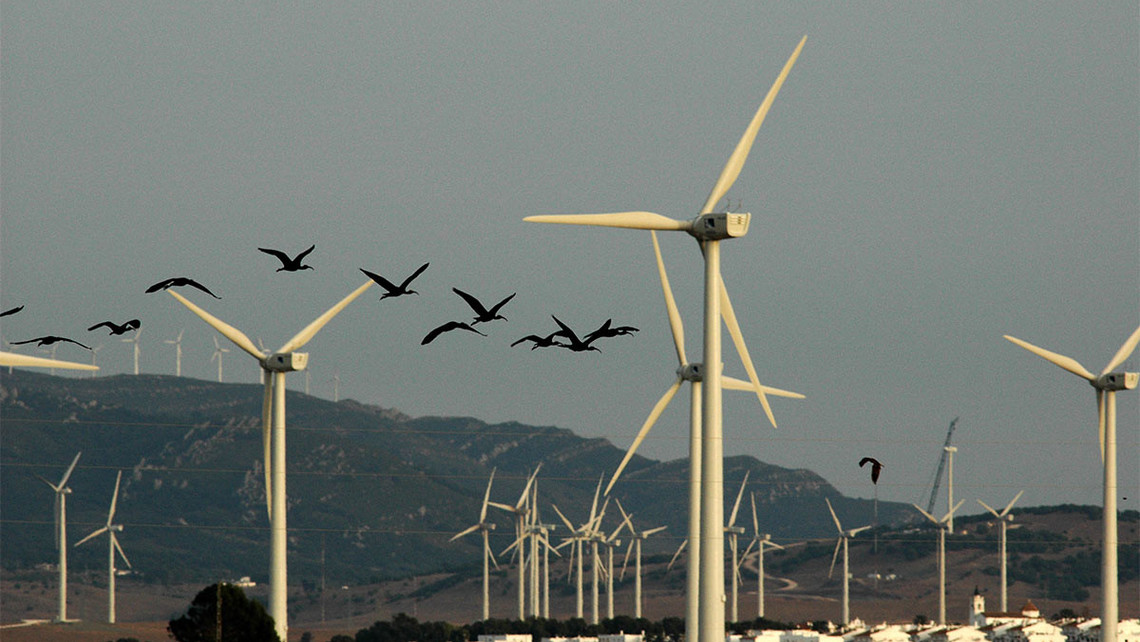 On 12 January 2012, at the First Scientific Congress on Wind Energy and Wildlife Conservation in Jerez de la Frontera, Spain, the Spanish Society of Ornithology (SEO/Birdlife) made public its estimate that, yearly, Spain’s 18,000 wind turbines may be killing 6 to 18 million birds and bats (1). The average per turbine comes down to 333 – 1,000 deaths annually, which is a far cry from the 2 – 4 birds claimed by the American wind industry, or the 400,000 birds a year estimated by the American Bird Conservancy for the whole United States, which has about twice as many turbines as Spain.


Bats are included in the Birdlife estimate, comments Mark Duchamp, president of Save the Eagles International (STEI).  “Therefore, supposing for example that wind farms would kill twice as many bats as they do birds, the figures would be: 111 – 333 birds per turbine per year, and 222 – 666 bats per turbine/year. The mortality figures that were recorded in Germany and Sweden in the early nineties are not unusual after all”, he notes. Quoting from a California Energy Commission study: “In a summary of avian impacts at wind turbines by Benner et al. (1993) bird deaths per turbine per year were as high as 309 in Germany and 895 in Sweden.” (2)


Duchamp has always maintained that earlier studies, made when bird mortality at windfarms wasn’t such a hot potatoe, were more credible than recent ones. “It is a curious business where those consultants who find or predict the lowest mortality land all the contracts. This is what is being asked of them, and this is what they do. This unethical conduct has already condemned the Tasmanian Wedge-tailed eagle to extinction (3), and more recently the Golden Eagle in the United States (4). Another factor is the occultation of carcasses by windfarm employees, as may be seen in the SEO/Birdlife report.”  (5)


The report also stresses that even a small incremental mortality for bird species whose populations are not abundant may drive them to extinction. “This is what I have been claiming for years”, laments Mark, who has been banned from ornithology forums as an unwelcomed messenger of bad news. “I am now vindicated, but that won’t save the birds”, he says.


SEO/Birdlife puts the blame on poor-quality environmental studies. So did Duchamp, as early as 2004:
“ …(avian impact assessments)… are sometimes voluminous and obfuscating, sometimes short and to the point, but mendacious always , minimizing the avian impact. They serve the purpose that is assigned to them: permit the erection of windfarms where the promoters want them, regardless of bird activity in the area.” (6)


Mark has long been claiming that it was foolish to allow environmental impact assessments to be directed and controlled by wind farm developers. It now appears he was right. The question is, he concludes: “will this aberration be allowed to continue?”

Thankfully, the word is continuing to spread regarding the destructive nature of wind turbines. | Quixotes Last Stand:

Obama’s Wind Power a Lot of Hot Air at US Action News:

[...] values, and forever changing the character of the area – these giant “Cuisanarts of the air” slaughter countless eagles, bats (already under serious threat from disease) and other magnificent flying creatures worldwide. [...]

Save the Eagles International South Africa
is associated with us:

Industry plan to reduce deadly effects of blades may not be enough, some scientists say... END_OF_DOCUMENT_TOKEN_TO_BE_REPLACED

A new study of eagle mortality at a wind facility near Palm... END_OF_DOCUMENT_TOKEN_TO_BE_REPLACED