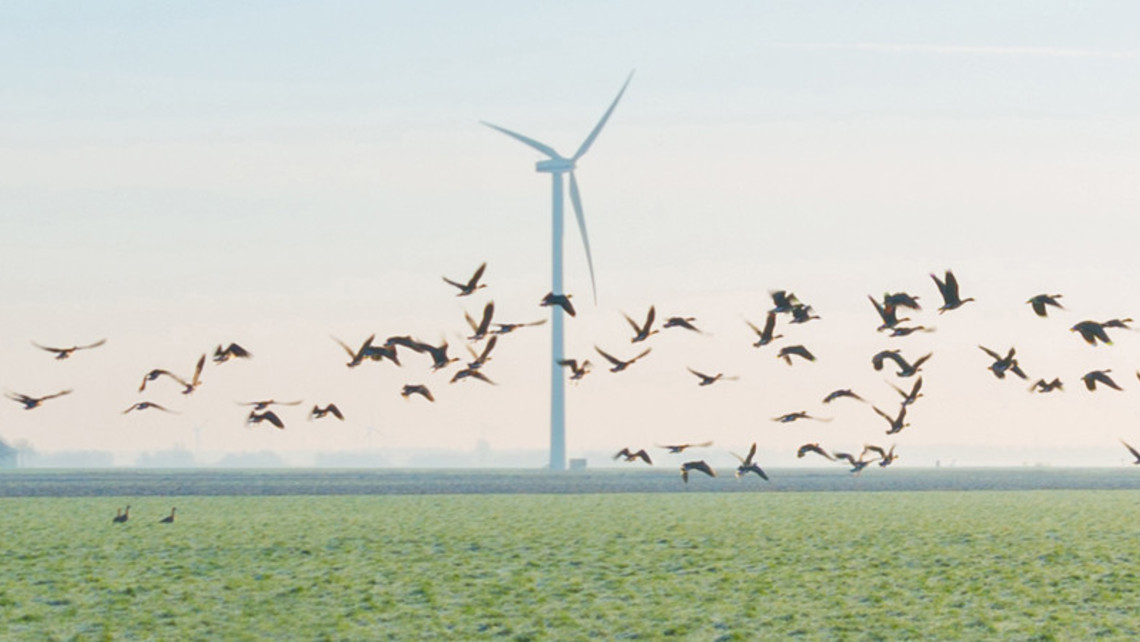 ABC often receives questions regarding wind energy development and its impacts on birds and other wildlife. In this three-part series, Michael Hutchins, Director of ABC's Bird-Smart Wind Energy Campaign, answers some of the more frequently asked questions about threats: How does wind energy threaten birds? What bird species are most threatened? How does the threat of wind energy compare to that of climate change?

See a full list of references at the end of the post and stay tuned for the second post in this series, scheduled for publication in mid-April.

How does wind energy threaten birds and bats?

Properly sited wind turbines are relatively bird friendly, especially when compared to fossil fuels. However, they are far from benign. Wind turbines and their associated infrastructure — notably power lines and towers — are among the fastest-growing threats to birds and bats in the United States and Canada. At the end of 2016, there were more than 52,000 operating, commercial-scale wind turbines in the United States and many more are currently under construction3.

Raptors, such as this Golden Eagle, are among the birds most threatened by wind energy development. Photo by David Lamfrom

We estimate that hundreds of thousands of birds and bats die every year when they accidentally collide with turbine blades9, 17, 25, 26. Fragile-bodied bats can even succumb to the pressures created when the giant turbine blades pass through the air, a phenomenon known as barotrauma10.

Associated power lines and towers, which carry the electrical power generated by wind turbines into the grid19, kill an additional 8 to 57 million birds every year through collisions and electrocutions18. Furthermore, wind energy development can also contribute to habitat loss and road and other infrastructure construction, all of which can have significant impacts on birds7, 27.

When it comes to wind energy, siting is everything. The risks are, of course, much greater when wind turbines are placed in areas attracting large concentrations of birds and bats12. When wind energy projects are located in or near major migratory routes, stopover sites, or key breeding or foraging areas, the losses are expected to be great. ABC believes that such high-risk areas should be avoided at all costs. However, state and federal regulatory agencies have not done a very good job of keeping wind projects away from these high-concentration bird areas4.

Do we know exactly how many birds are killed by wind turbines and wind energy infrastructure every year?

Unfortunately, the answer is no. All we have at present are very rough and potentially biased estimates9, 17, 25, 26 that are based on an accumulation of studies from individual, unidentified wind energy facilities.

The reason? The wind industry treats these data as trade secrets and generally does not share them with the public or concerned conservation organizations. Some wind energy developers have even sued to hide these data from the public2, 14. Hawai'i is currently the only state that requires mortality data be collected by independent, third-party experts and makes the information available to the public on request13.

Biologists estimate that millions of U.S. birds are killed every year by wind turbines and the power lines and infrastructure that supports the wind energy industry. Photo by Marijs / Shutterstock

These estimates that are made public — all of which range in the hundreds of thousands of birds and bats killed annually — are based on non-standardized data that were collected and reported by paid consultants to the wind industry. This is a direct conflict of interest15 that may lead to a reporting bias in favor of the wind companies (meaning, the numbers of killed birds and bats may be under-reported).

There are also methodological challenges. Dead birds are difficult to find under wind turbines, and studies have shown that even trained observers can easily miss them. Additionally, predators are known to locate and remove carcasses, which can also lead to underestimates of the number of bird and bat carcasses documented15.

Deaths due to collisions or electrocutions at power lines and towers associated with wind energy development are even more difficult to estimate, as there are thousands of miles of power lines, some in remote locations, that are seldom or never monitored for bird deaths18.

Finally, many of these estimates are several years old and are likely now out of date. In the years since many of these data were collected, wind energy companies have built many more turbines, power lines, and other infrastructure. This suggests that the toll on birds and bats is now much greater.

The fact that the energy companies are allowed to self-report their own violations of the Endangered Species Act (ESA), Migratory Bird Treaty Act (MBTA) and Bald and Golden Eagle Protection Act (BGEPA) is a violation of the first principle of scientific integrity — that is, those that have a vested interest in the outcome should not be the ones collecting and reporting their results to regulatory agencies1, 5.

Are certain species of birds more impacted by wind energy than others?

Knowing the number and type of species affected by wind projects depends on the ability to detect birds at the site in question at some point during their life-cycle. This is a challenge for all of the reasons previously mentioned — reporting is voluntary, inconsistent, and out of date.

That said, we do know that many species of birds are impacted by wind turbines25 and that those species that are most susceptible to turbine collisions and/or displacement are raptors, night-migrating songbirds, and grassland birds.

Turbines and power lines associated with wind energy give predators a place to sit and watch for prey such as Greater Sage-Grouse, increasing the threat of predation for these grassland birds. Photo by Tom Reichner/Shutterstock

Of these, grassland birds may not be as susceptible to collisions as raptors and night-migranting songbirds. However, some species, such as Greater Sage-Grouse, are stressed and displaced by tall structures where their predators can roost. This can influence the birds' reproductive success and prevent genetic interchange between populations, thus threatening the species' long-term survival16, 20, 22, 24, 28.

Raptors — though they have excellent vision — have their eyes focused on the ground looking for prey and do not detect the approach turbine blades, and night-time migrants do not see the blades.

Climate change certainly poses a significant threat to wildlife and their habitats, and wind power is viewed as a major player in our efforts to combat climate change.

However, there are plenty of reasons to be skeptical.  Back in the 1950s and '60s, hydroelectric dams were viewed as a source of clean, renewable energy.  Now they are being torn down due to their unintended environmental impacts11. A recent study even suggests that hydroelectric dams may contribute to climate change6.

The same goes for biofuels, which are now being seen as a contributor to climate change, rather than a viable source of clean, renewable energy23. Poorly sited wind turbines could be next in line for enhanced scrutiny.

Wind energy offers some environmental benefits over other forms of energy, but is not without its own risks. Photo by Marijs/Shutterstock

Unfortunately, many individuals — and even some conservation organizations — have embraced wind energy completely without asking the hard questions about its environmental impacts. The wind industry and its proponents have contributed to this situation themselves, downplaying its impacts on wildlife3 while simultaneously overselling the industry's ability to mitigate associated problems8. At the same time, industry players have worked behind the scenes to try to minimize state and federal regulations and to attack important environmental legislation, such as the Migratory Bird Treaty Act21.

Wind turbines are a cleaner source of energy than fossil fuels. This is true. But does this mean wind energy developers should be less regulated than others in the energy sector? Should they be allowed to kill tens of thousands of federally protected birds and bats annually with impunity? We at ABC believe the answer to these questions is “no.”

In response to this very question, we at ABC developed the concept of “Bird-Smart” wind energy development. Put simply, this term is used to describe wind energy projects that are designed to minimize bird fatalities to every extent possible12. Bird-Smart wind energy:

Editor's note: Learn more about Bird-Smart wind energy, and look for the next installment in our wind energy FAQ series for more information.

Michael Hutchins, Director of American Bird Conservancy's Bird-Smart Wind Energy Campaign, earned his Ph.D. in animal behavior at the University of Washington. Prior to ABC, Michael was Director/William Conway Endowed Chair, Department of Conservation and Science, at the Association of Zoos and Aquariums for 15 years, and Executive Director/CEO at The Wildlife Society for seven years. He has authored over 220 articles and books on various topics in wildlife science, management, and conservation, and has traveled to over 30 countries to pursue his passion for conservation.

Robertson, R. 2014. Balance of power and environment in the Sandhills. NET News.

Industry plan to reduce deadly effects of blades may not be enough, some scientists say... END_OF_DOCUMENT_TOKEN_TO_BE_REPLACED

On 12 January 2012, at the First Scientific Congress... END_OF_DOCUMENT_TOKEN_TO_BE_REPLACED

A new study of eagle mortality at a wind facility near Palm... END_OF_DOCUMENT_TOKEN_TO_BE_REPLACED