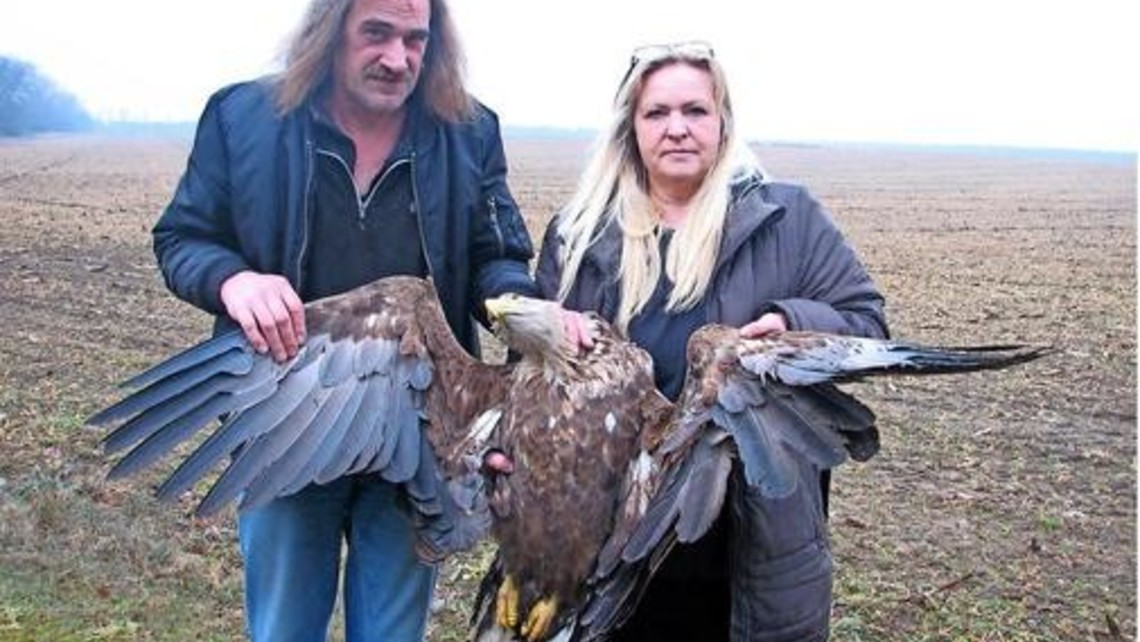 A sea eagle was slain by a wind turbine near Wernikow on the weekend. Workers at the wildlife sanctuary in Struck found the dead raptor. Whether it had a brood to take care of is unclear. In the state of Brandenburg 48 protected birds have already been killed by wind turbines.

Wernikow. A sea eagle was slain by a wind turbine near Wernikow on Saturday afternoon. The bird lay dead on the field when Uwe and Angie Löblich from the wildlife sanctuary in Struck (Prignitz) found it. They were actually looking for suitable spots to release swans. But they determined that the water was still frozen, thus deemed the area unsuitable.

Instead they found the sea eagle. The wind turbine had obviously hit its wing. It was broken, the blood still fresh. Had the eagle lain there any longer, scavengers would have eaten it.

Uwe and Angie Löblich from the wildlife sanctuary in Struck with the eagle found near Wernikow. Source: Björn Wagener

Wind turbines always spell doom for raptors and storks. “They perceive the blades to be a veil,” says ornithologist Jürgen Kaatz. They cannot judge the speed of the blades at the tips. But the vortices are also dangerous – air turbulence behind the turning blades.

According to Kaatz, the donor card for the wildlife sanctuary of the state of Brandenburg points out that currently 144 sea eagles have been killed by wind turbines (as at January 11, 2018). Brandenburg claims the inglorious top position with 48 dead sea eagles. To compare: in Mecklenburg Vorpommern there are 39; in Schleswig Holstein 37. “These are only the official numbers. One can assume unreported cases,” says ornithologist Jürgen Kaatz.

The Löblichs confirm this: Every year they discover one or two wind turbine bird fatalities. How many birds are found and not reported or dragged off by scavengers no-one knows.

The brood would starve

It’s possible the slain sea eagle near Wernikow already had a brood to provide for. That cannot be determined with certainty. The male bird was not banded, but judged to be about four years old – just on the cusp of breeding maturity. Kaatz hopes that the bird had no young to feed, because in that case they would starve. Sea eagles breed as of mid-February.

According to Kaatz, Altkreis Wittstock is home to four known sea eagles. There could actually be six or seven. Eagles take a very long time to find a new partner, should something have happened to theirs.

Uwe and Angie Löblich know only too well the suffering that is behind the statistics. “I held it. And you feel the animal’s pain. It gets into your bones,” relates Uwe Löblich, when he had a stork in his arms whose beak was for the most part sliced off.  Other birds were dismembered or had their wings torn off or their legs cut off. Some were dead, others half dead, report the Löblichs. Some injured birds drag themselves to the road, hoping to be found. “People should imagine that it was their kids involved. Maybe then they would wake up,” says Uwe Löblich. But as long the politicians do nothing, protected birds will continue to meet their death by the rotating blades.

Recent studies have reported large numbers of bats being killed at wind farms in many parts of North... END_OF_DOCUMENT_TOKEN_TO_BE_REPLACED