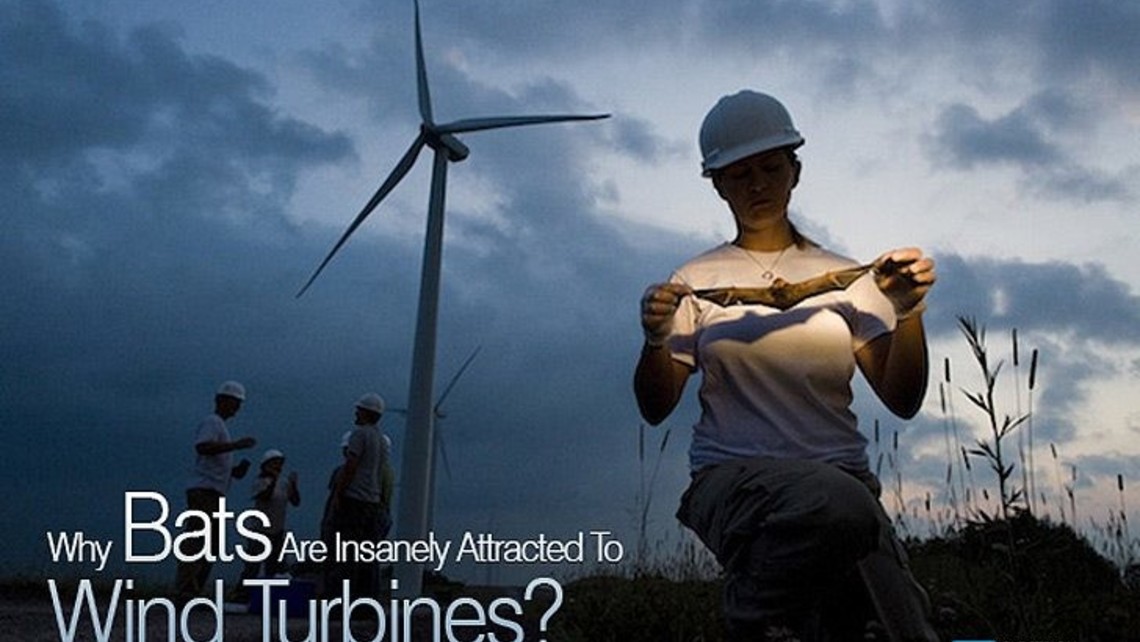 Bat kills at wind turbines were first discovered in Australia. Small numbers of bats were first recorded in the United States at wind power projects in California during bird monitoring.

Some time ago, an estimated 1,400-4,000 bats were recorded as killed during 2008 at the Mountaineer Wind Energy Center in West Virginia . High bat mortality at that site has continued since then.

The frequency and number of bat kills at wind turbines are much greater than for any other type of human-built structure.

Bat Mortality from Collisions and Barotrauma

Bats that fly too close to wind turbines are killed by either direct impact or from major air pressure changes around the spinning rotors.

While bats clearly are killed by direct collision with turbine blades, up to 50 percent of the dead bats around wind turbines are found with no visible sign of injury.

The cause for this non-collision mortality is believed to be a type of decompression known as barotrauma, resulting from rapid air pressure reduction near moving turbine blades.

Barotrauma kills bats near wind turbines by causing severe tissue damage to their lungs, which are large and pliable, thereby overly expanding when exposed to a sudden drop in pressure.

By contrast, barotrauma does not affect birds because they have compact, rigid lungs that do not excessively expand.

Many species of bats appear to be significantly attracted to wind turbines for reasons that are still poorly understood.

Here we’re gonna try to summarizes the more plausible scientific hypotheses that have been advanced to date. By contrast, birds are not normally attracted to wind turbines, and simply collide with them by accident.

The Eastern Red Bat Lasiurus borealisis typical of the migratory, tree-roosting bat species that are frequent casualties at some wind farms in North America.

The more plausible hypotheses include the following:

Bats may be attracted to the audible “swishing” sound produced by wind turbines. Museum collectors seeking bat specimens have used long poles that were swung back and forth to attract bats and then knock them to the ground for collection.

It is not known if these bats were attracted to the audible “swishing” sound, the movement of the pole, or both factors.

Wind turbines produce complex electromagnetic fields, which may cause bats in the general vicinity to become disoriented and continue flying close to the turbines.

As flying insects may be attracted to wind turbines, perhaps due to their prominence in the landscape, white color, lighting sources, or heat emitted from the nacelles, bats would be attracted to concentrations of prey.

Bats may be attracted to the heat produced by the nacelles of wind turbines because they are seeking warm roosting sites.

Wind turbines may attract bats because they are perceived as potential roosting sites.

Migratory tree bats may be attracted to wind turbines because they are the highest structures in the landscape along migratory routes, possibly thereby serving as ren-dezvous points for mating.

Wind farms constructed along forested ridge-tops create clearings with linear landscapes that may be attractive to bats.

The clearings around wind turbines and access roads located within forested areas create forest edges. At forest edges, insect activity might well be higher, along with the ability of bats to capture the insects in flight.

Resident bats as well as migrants making stopovers may be similarly attracted to these areas to feed, thus increasing their expo-sure to turbines and thus mortality from collision or barotrauma.

In North America, migratory bat species have been found dead at wind farms much more frequently than the resident (non-migratory) species, even in areas where the resident species are more common throughout the summer.

Eleven of the 45 species of bats that occur in North America north of Mexico have been found dead at wind farms, but most studies report that the mortality is heavily skewed towards migratory, tree-roosting species such as Hoary Bat Lasiurus cinereus, Eastern Red Bat Lasiurus borea-lis, and Silver-haired Bat Lasionycteris noctivagans.

While these three species are not listed as threatened or endangered under the U.S. Endangered Species Act, they are classified as of Special Management Concern at the provincial level in Canada. Although the globally endangered Indiana Bat Myotis sodalishas not yet been found dead at wind farms, potential new wind farms within this species’ remaining strongholds could possibly threaten it.

In Europe, 19 of the 38 species of bats found within the European Union have been reported killed by wind turbines.

Although migratory species are among the most numerous casualties, resident bats are also killed in substantial numbers, particularly in forested areas.

Turbine-related bat mortality has been found in every European country in which bat monitoring has been done, except for Poland where no dead bats were found during monitoring at two sites. The highest numbers of bat fatalities have been found in Germany and France, which is almost certainly due to the more extensive monitoring carried out in those countries.

Bats are worth billions to the agriculture industry due to their natural control of pests. Unfortunately, wind power poses a risk to bats due to the potential for them to be struck by spinning turbine blades.

EPRI is working with We Energies to demonstrate a specialized technology that uses ultrasonic microphones to detect the presence of bats. If the microphones pick up the high-pitched squeaks and clicks bats make, the turbines will automatically shut down and restart when the bats are out of range.

The project is focused on reducing bat mortality at wind farms while avoiding long-term curtailments and maximizing electricity production.

In Latin America, 19 bat species were represented among the 123 individual bats found dead under wind turbines in 2007-2008 at the La Venta II project in southern Mexico. In 2009, 20 different bat species were involved (INECOL 2009).

Thirteen of these species are insectivores, while two feed mainly on nectar, and two on fruit.

The most commonly killed species, Davy’s Naked-backed Bat Pteronotus davyi, is thought to be resident in the area, although some other frequently killed species at La Venta II are considered to be migratory.

Interestingly, despite the enormous concentrations of mi-gratory birds that pass over or through the La Venta II wind farm (over 1 million per year), monitoring data from INECOL show that a larger number of bats are being killed there than birds.